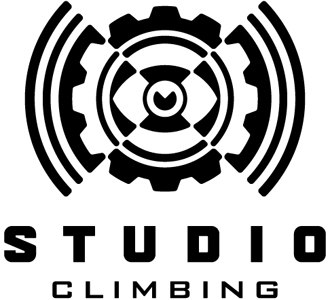 Touchstone Climbing is opening yet another gym, this time in downtown San Jose, California. Located in a former movie theater called Studio, the building features a classic 1950 channel lettering neon sign. As part of our visual research, we took photographs of the signage while atop an electric scissor lift 30 feet above the street so we could capture the images without distortion. These photographs ultimately became the basis of hand-inked studies with which we created custom lettering.

The eye and gear symbol we designed references the history of the building as a theater, and is inspired by ideas of projection and seeing. The art was meticulously crafted to optically pulsate: it both radiates outward as it simultaneously contracts inward to the center. Noted speed climber Hans Florine summarizes the new Studio identity on Facebook with the phrase “I got my eye on your gear.”